Karungkarni Art is located at the entrance to the community of Kalkarindji, in the Victoria River region.

The name Karungkarni refers to the Child Dreaming place for Gurindji people; a sacred site imbued with procreative powers. Elders named their art centre after this Dreaming to remind them of their important responsibility to pass on cultural knowledge to their children. 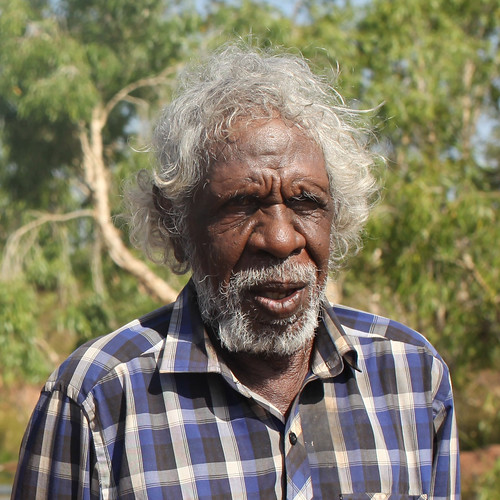 Timmy Vincent Jurluma is a Malngin/Gurindji artist. He was born under a tree on Old Wave Hill Station (Jinparrak) in the wet season of 1951. By the time he was 8 years old, he was working with the horses and as a stockman.
In 1966, Timmy’s father, Vincent Lingiari, initiated a workers’ strike to protest against the poor conditions of their employment and ultimately recover control of their traditional lands. Since the Wave Hill Walk Off, led by his father, Timmy has remained at Wattie Creek (Daguragu).
He retired as a stockman in 2015, and began to accompany his wife, Kathleen Sambo, to the art centre each day. Timmy now paints his own Dreaming designs, including Snake Dreaming (King Brown), Karrajkarraj and Ngamanpurru – the Dreaming for Daguragu.