Located in the West Kimberley, Mowanjum art is inspired by ancient rock art. The three language groups are united by their belief in the Wandjina as a sacred spiritual force and the creators of the land. 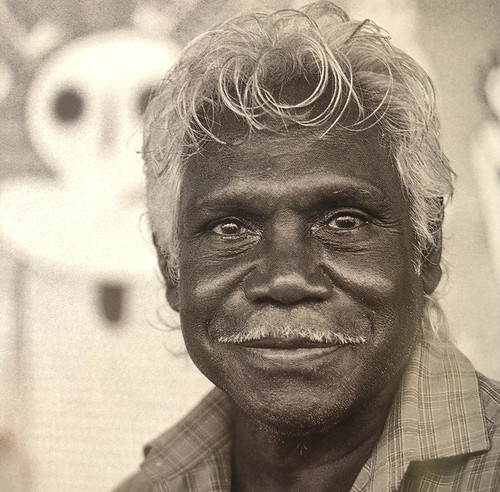 Donny Nyorna Woolagoodja was born c.1947 at Kunmunya Mission on Worrorra Country in the remote northwest Kimberley coast of Western Australia. Educated in two worlds, he understands the white world whilst nurturing the deeply held traditional beliefs of his people.

As a small child, Donny and his family were moved to Mowanjum, far south from their traditional lands. Here he watched his elders paint Wandjinas and learnt the Lai Lai creation stories. After his father died in 1979, Donny took responsibility for the land and the passing down of his culture and traditions. He became active in the pursuit of native title and began to paint, quickly becoming one of Mowanjum’s foremost artists.

Donny maintains his strong connection to Worrorra Country. His Wandjina Namarali was featured on an epic scale during the Opening Ceremony of the 2000 Sydney Olympics. He also co-authored ‘Keeping the Wandjinas Fresh’ in 2005; the story of his inheritance of his father’s law responsibilities and commitment to his art and culture. Donny has exhibited widely throughout Australia along with Europe and USA.